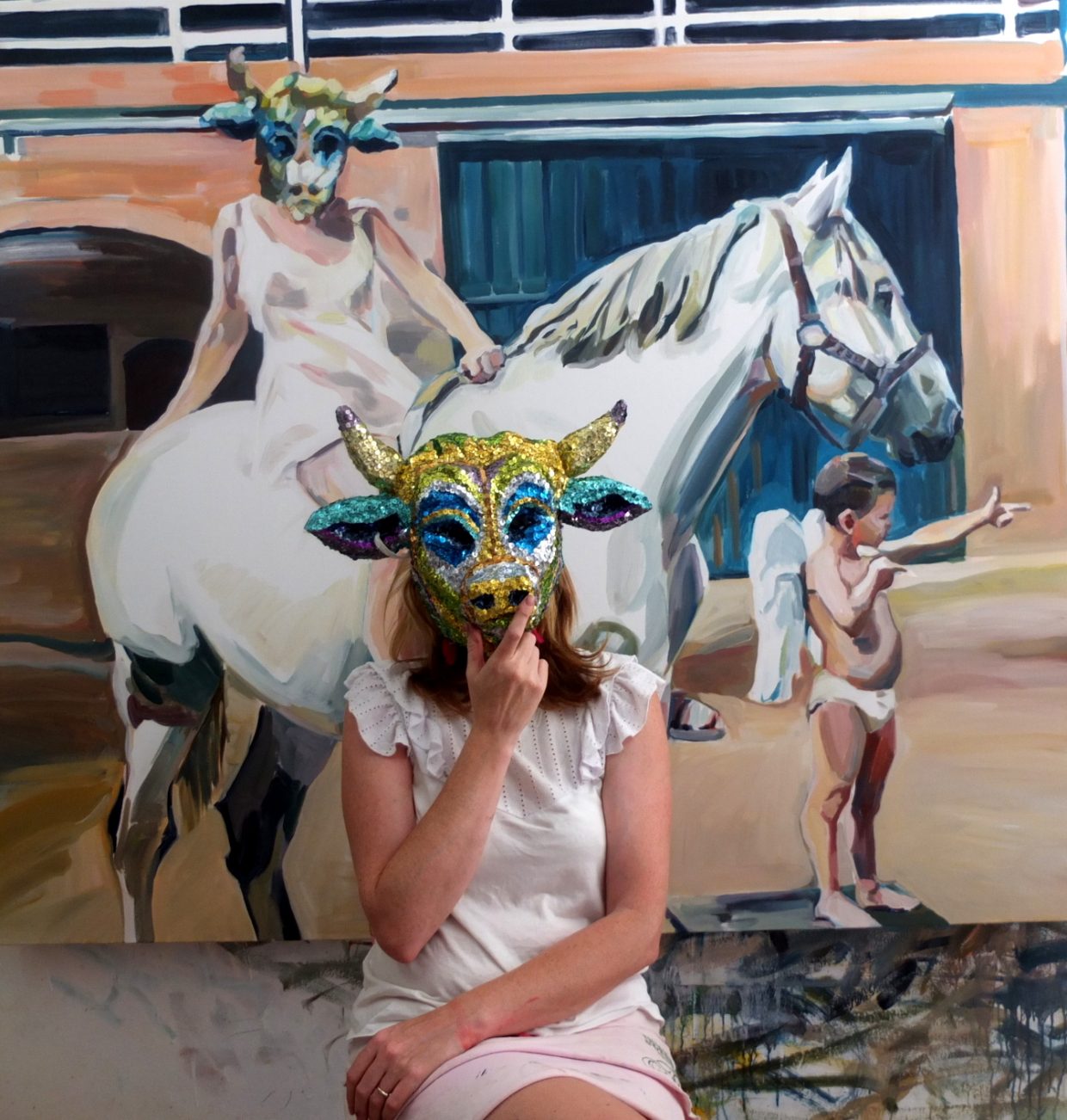 In 2003 she gained a 1st Class BA in Fine Art (Painting) from Chelsea School of Art. In 2005 she completed an MA in Painting at the Royal College of Art, where in 2004 she won the Amlin Prize for the most promising young artist.

In February 2006 she founded, exhibited and directed The Shaman Project, which like the nomads, is a moving, exhibition/event of music, art and performance. Following the great success of the first show in Salamanca, Spain, she then continued a larger scale inviting 14 artists to take part in the second Shaman Project in Bilbao in 2006, where her performance with a live horse was screened.

The third exhibition to date, took place in North Wales, at Oriel Plas Glyn-Y-Weddw. Elinor Evans participated and directed a performance which related to her surroundings. She brought back the nostalgia of her home land, North Wales, and, using her typical subject matter, she portrayed the well-known legend of Gelert. Accompanied by her faithful hound and muse, Picasso, and other animals (including a live horse) she brought the tale to life to the enjoyment of the large audience. With live flamenco music sung by Javier Santos, the whole performance was imbued with a Spanish flavour.

Evans has widely exhibited in Britain and Spain. She was selected for Art Review’s Ten of the Best B.A Graduates after graduating from Chelsea College of Art in 2003. She then won the Fine Art award in the National Eisteddfod in Wales.

“Elinor Evans has a confidence of line and form that belie her years. There is a freshness in her work which has an unsettling undercurrent and echoes the American Artist Eric Fischl”

In 2006 Evans won the prestigious Young Wales VII Award held in the Royal Cambrian Academy, Conwy, UK, after being selected to exhibit in previous years.

Elinor was selected in second place as one of the Young Masters of Generation Y. In the article, Oil is Back, in Bon Magazine (2007), Freire Barnes writes: “Evans is what we would call a “painter’s painter” producing canvases at a prolific rate.”

‘Although there is a metaphoric and fantasy element in her work, most of her images have their roots firmly in reality´

Naked behind the Mask was her second solo show at the Apartment Gallery in London in 2008 where she explored further the special relationship which she believes exists between animals and humans. In this series of paintings and drawings Elinor Evans disrobes her human models, in poses inspired by the nude paintings of the great masters from the 18th-century, albeit with tongue in cheek. The characters are laid bare in all their nakedness, but they are unable to rid themselves of the ubiquitous masks.

Evans sets these stylized scenes, which depict the relationship between the human body, hypocrisy and animals. They are then transposed from digital technology, film and video, in a rapid, enthusiastic application of oil, onto larger canvases. The effect is surprisingly tactile, with furry fabric and heavy furniture and a silky-looking dog.

Evans’s Dalmatian dog, Picasso, her muse, embodies the innocence and loyalty of animals.

¨Elinor Evans explores the same broad themes but with a difference. Now a mother, living in Spain with her family, she has embraced this new lifestyle and moved away from her flirtatious style. Instead the new series includes children (still hidden behind masks) and the poses have a strange diffident formality about them. The human figures seem to be forced into party frocks and ill-fitting and inappropriate shoes and look distinctively uncomfortable. While the familiar animal’s characters seem to be their normal relaxed unpretentious superior selves¨

As well as keeping busy in the studio producing new works and masks, Elinor has been exhibition in group shows in Madrid, Murcia, London and Wales.

For the past three years Elinor has participated in the annual event  Noche en Blanco – a night of music, drama and art. The streets, plazas and castle of El Barco de Ávilia are filled with lively performances all night long.  Elinor puts on a masked group performance against the backdrop of specially created paintings representing the theme. The first year was The Musicians of Bremen. The second year, Don Quijote and this year she’s basing her performance of the myth of the Minotaur.

She has been giving Art Workshops to children during the summer months.

And just recently she has started selling work in America.